SOME THINGS ARE BETTER LEFT UNSAID

I’m not talking about that.

This is about something else…something completely different…something most people would say, “Why are you even telling this?”

It started on Mother’s Day.

I was almost late walking into the sanctuary at church. Wendy was already seated in the aisle with her mom, her dad, and her brother.

The church’s tradition is to put a slip of paper in the bulletin for everyone to write a mother’s name who is present that day.

Since I was almost late, all the bulletins were gone, and I didn’t get a slip.

Wendy didn’t have anyone voting for her…she looked really sad.

“I don’t have a slip,” I said…she looked really sad.

A mother behind me gave me a slip.

I rushed it to the front…just in time.

We never win anyway…but she at least had her name in the basket.

Wendy won a 25.00 gift certificate to Potpourri House in Tyler.

A couple of weeks later, we were spending the afternoon with Zoë, and Wendy said, “Let’s go to Potpourri House so I can get something with my prize.”

I told Zoë the story.

**”We never win anything, but we finally won a drawing!”**

Wendy found a pretty little ceramic bread dish that said, “Butter me up,” with a knife that said, “I’m on a roll.”It would be perfect for our new obsession of toasted baguettes with olive oil, Texas made balsamic vinegar, basil, tomatoes, and fresh mozzarella. 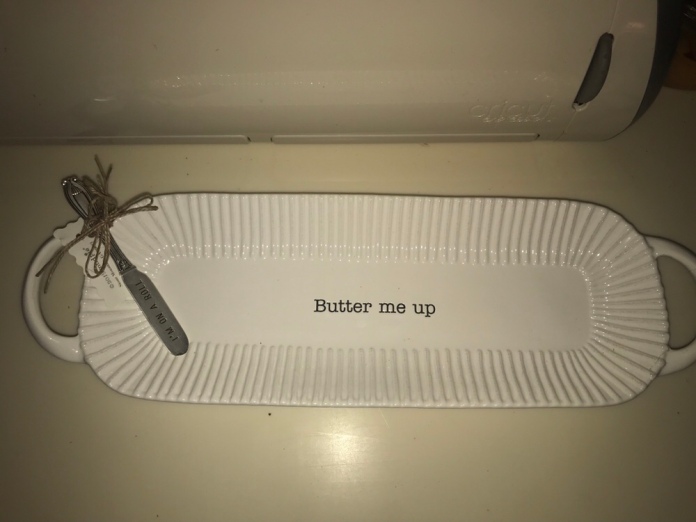 A few days later, I was washing dishes (new dishwasher wasn’t installed yet) and I came across our butter dish in the sink.

Now, there was nothing particularly beautiful about this butter dish, but we had looked for a long time before we found one like it. It held two sticks of butter and had a knob on top to lift the cover off.

That night, I heard, “Oh! No!” and the sound of glass hitting glass.

I turned. The cover of the butter dish, the one with the knob, had slipped out of Wendy’s fingers and broken the bottom of the dish, then bounced over to break the end handle off the new ceramic bread platter.

Wendy told me later that she had had a bad feeling when I said something about it that morning.

Now, I’m not saying anything about superstitions like actors saying “break a leg,” or anything of significant importance about this incident.

Our lives didn’t change, our day wasn’t ruined because of this accident.

But it is sort of weird that I said what I said at that time, don’t you think?

This is just an insignificant event in a day to day life.

So, why even mention it?

Well, I’ve been thinking about this all week, and today it reminded me of something important.

We had an automobile accident in 2002 that took the earthly life of our daughter Chelsey, Zoë’s mom.

It was sudden, and tragic.

Our lives, our plans, our futures were shattered in a moment.

But, in the week before that day, Chelsey had had a sense that she was to visit her great grandparents, her cousins, her aunt and uncle, all the people who lived on the plot of land where she lived, but whom she had been too busy to see for a while.

She was drawn to them, pulled by some unseen force, to reconnect.

So she took a couple of days and just went to each house and sat and talked and visited.

They laughed and told stories, just enjoying the connection they had;

The bond of a close family.

No one knew that this would be their last visit.

But they all remembered these visits.

They all cherished this memory.

We never realize how important those little moments may turn out to be.

3 thoughts on “SOME THINGS ARE BETTER LEFT UNSAID”