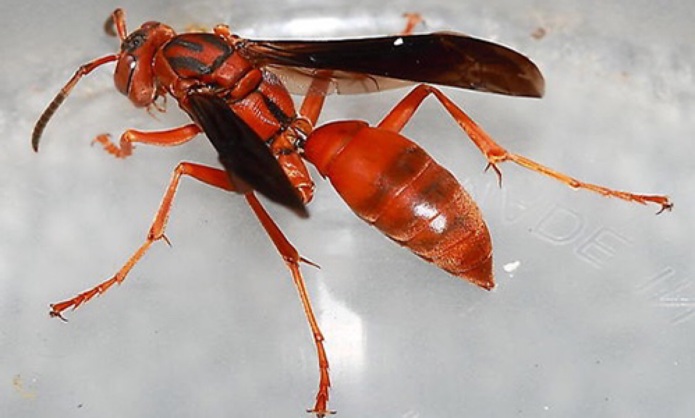 Well, I thought I might make it through the summer without getting stung.

I’m a chimney sweep and window cleaner, and every so often, I disturb a nest of red wasps.

Over the years, I have been stung many, many times.

But, about ten years ago, I got stung while on a ladder, on the back of my neck.

It always made me mad.

I carried multiple cans of Wasp/Hornet spray, so that “vengeance could be mine…”

I did much vengeance.

But, this time, I started to itch, at my feet, then it started to travel up my legs, then my whole body.

I raced to Brookshires to get some Benadryl, took it before I paid for it, and drove home with a foggy twilight zone kind of tunnel vision.

I collapsed on the bed, sweated profusely until the poison left my system.

A doctor friend gave me a prescription for an EpiPen two pack.

I was stung a few other times through the years, but I always was a little bit afraid to use the Pen, and I would just take benadryl.

The fog would come, and I would wait it out, and, after about an hour, I would go back to work.

The first time I used the pen, it had probably just gone out of date, because, this last Wednesday, when I got stung, I used the last one, discovering several hours later that it had expired in June of 2016.

If it worked, it didn’t do much.

I was at an empty house at the end of a road at Holly Lake Ranch, and , when the reaction began, I decided to just wait it out as usual.

I only had three windows left to do, but then I had two more jobs scheduled.

The itching was brutal.

The hour passed, and I decided to do the last three windows.

My ladder felt so heavy.

I sat back down.

I looked up, and there right at the driveway entrance was my good friend, David Painter and his helper, Johnny, who both work for Holly Lake Ranch.

David saw me sitting, realized something was not right, and came over and nursed me, called security to check my blood pressure, told Wendy on the phone to make me come home, gave me Gatorade and trail mix, made up an ice pack to cool me down, fanned me….

I lived to fight another day.

I realized in this life I am living now, how important it is for me to always be vigilant and alert, watching for those sneak attacks of the enemy, being ready in season and out to fight the battles.

But when the sneak attacks come, and I am down, God always has a backup plan.

It’s usually those friends that are sharers of this Life, the ones that “just happen” to show up at just the right time.

To God Be The Glory.

His light shines through His children.

Thank you, David and Johnny, for seeing, and helping.