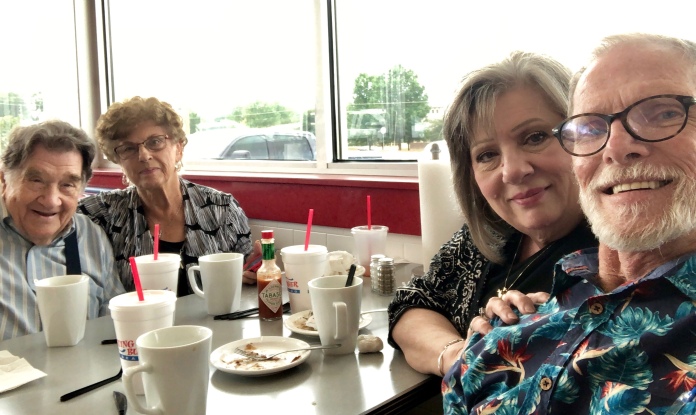 Blair turned 92 on July 5th. We gave him a card and a promise: dinner on us at Flying Burgers and Seafood in Longview.

So, today after church, that’s where we went.

We ordered our meals and picked a booth.

After the meal, Mary Jane reminded me,

” Randy, take your receipt up there and get our free cinnamon rolls!”

Oh, yeah! Free cinnamon rolls with dinner on Sunday! I grabbed the ticket.

“We would like four cinnamon rolls, please.” I handed her the receipt. Being the good son in law, I asked, ” Do you have coffee?”

“We would like four coffees, too, then.” Coffee and cinnamon rolls. Now we’re talking.

She turned and grabbed four nice ceramic mugs. She handed them to me with a smile. There was a k-cup inside each mug. I looked by the drink machine and there it was; a single one cup do it yourself keurig coffee maker.

I know, free cinnamon rolls, but you pay for the right to make your own coffee.

I started the first cup. Two servers came out from behind the counter with four hot cinnamon rolls. I pointed back to our table, and they delivered them.

The first cup took at least 4 minutes. So, I started the second cup, looked for the powdered “cream” and Splenda, then stood there until the next one finished.

I started the next one, carried the first two back to the table.

“Randy, you are all right! ” Blair said. I gave him a thumbs up. I could smell the cinnamon.

I love the smell of cinnamon.

I hurried back for the third cup.

Oh, great, the keurig is out of water.

I went to the counter. “I need some more water for the keurig, please?”

A couple of minutes later, one of the girls brought out a Styrofoam cup half filled with water, and poured it in.

“Thank you,” I said as I started the third cup.

I played a game on my phone. Finally the familiar ending spurt.

I started the fourth, carried the third to the table, and hurried back for my cup.

“What? One inch of coffee? Come on?” (Silent words, not out loud.) I saw the add water light flashing. “This is worse than self checkout!”

I asked for more water, waited a few minutes, and they handed me another cup of water.

I poured it in the reservoir, hit the brew button, and waited.

Another game on my phone.

Twenty five minutes to get 4 cups of coffee.

I went back to the table and they had finished their cinnamon rolls and their coffee.

Wendy’s mom was finding pictures on her phone and showing them to Wendy across the table.

Blair hadn’t said much while the catfish was on his plate.

“That’s the one time he doesn’t talk much,” Mary Jane said,” When he’s eating catfish.”

She found another picture, turned her phone toward Wendy. They both laughed.

“You know,” Blair began, “these clouds remind me of a time when I was about 10. Me and my friends were outside my house breaking up little pieces of wood so we could build a fire. Three guys were about my age and one guy, Douglas Teasdale, who was older, but he liked to hang around with us.

“I was swinging the axe, and it slipped and hit my little toe.”

He held is fingers about 3/4 of an inch apart and said, ” About this much of my little toe was just dangling there.

“It was bleedin’ pretty good, and none of the guys my age knew what to do. No adults were around, but Douglas said to one of the guys, ‘Go inside the house and get a needle and some white thread. And some alcohol. Get some alcohol.’

“He ran into the house, found the stuff and came running out. Douglas poured the alcohol on the needle and the thread, and sewed my little toe right back on.

“You know, it never did really hurt at the time. I guess I must been in shock a little bit.”

“What ever happened to Douglas Teasdale?” I asked.” I hope he became a doctor!”

“I don’t really know,” he chuckled, “but, if you look at that little toe, you can still see a little bit of a stichin’ pattern.”