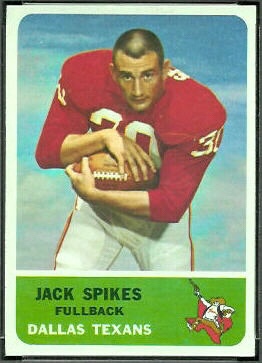 Wendy’s mom gave me an article written by a guy about my age.

It was about the time he met his first professional football player in 1960. He was nine. Me, too.

Eddie LeBaron, first quarterback for the Dallas Cowboys, the guy who held down the fort in those formative days as they groomed Dandy Don Meredith for the role.

But there was another team in Dallas at that time, the Dallas Texans of the American Football League. 8-6 in the first season of the fledgling league. They won the championship in 1962.

They had two running backs; Abner Haynes and Jack Spikes.

Sometime in those three years, my church, Monica Park Christian Church in Garland, Tx had a father/son banquet. Jack Spikes was the featured speaker.

We hadn’t yet developed into big football fans. Honestly, my earliest memory of football on tv was seeing the end of some important game at my grandparents’ house, when the losing quarterback removed his helmet, and he was bald! Seriously? A bald quarterback? Y.A. Tittle.

Anyway, I guess Jack Spikes gave a good talk. I was nine or ten, so I probably didn’t absorb too many details.

Earl punched me in the arm.

“Ask him how many times he’s shaved on tv,” He whispered.

I raised my hand. Jack Spikes saw me. Pointed to me.

“Uh, how many times have you shaved on tv?”

That week, Casey’s Callum, the sports column in the local paper, The Garland Daily News, (Casey Cohlmia, who had twin daughters my age, and also went to our church) reported about the celebrity visit to our little church.

“One bright young lad even asked Jack Spikes how many times he had shaved on tv.”

That’s right! I was famous! Mentioned in the newspaper!

When I saw Earl, I said something about the column.

“I know,” he said, “I couldn’t believe he mentioned me in his article!”

One thought on “BRUSH WITH FAME”