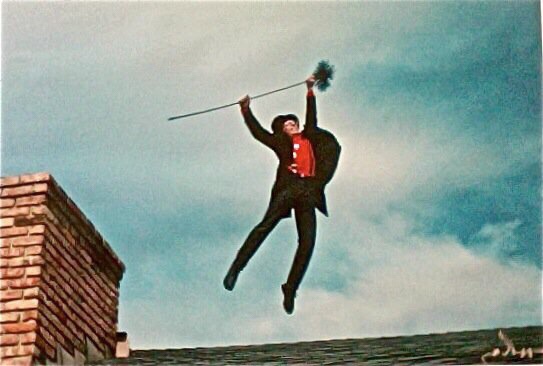 The story behind the picture:

Five or six years ago, we were having our traditional Christmas Eve get together at Wendy’s parent’s house. We always would eat our snack foods first, then gather around the tree to do our gift exchange.

Wendy’s brother, Craig seemed a little antsy, and he seemed to be kinda pushing everybody into the room where the tree was.

“Randy, sit down here,” He said and walked out of the room.

A moment later, he came back, carrying this picture.

He and Belinda had been in an art gallery in Winnsboro and saw this photo on the wall.

He said,”That’s Randy! We gotta get that!” They got it.

1987 or 1988, right after I had become a full time self-employed chimney sweep, I received a phone call one evening.

“HI! My name is Ray(I can’t remember the last name) and I saw your add in the Winnsboro paper. I am a professional photographer, and I wonder if you would let me take some pictures of you? ”

We made arrangements to meet at a house in Winnsboro where I was scheduled to work the next day.

Dressed in top hat, tails, red shirt and scarf, I met him as planned.

He told me he was trying to get a photo into some major magazine. So, he had me get on top of the chimney, took many shots from all angles.

“Do you think you could jump off that chimney?”

I jumped. (It was my idea to hold that brush that way.)

He thanked me, and left.

I never heard from him again.

I love that picture!

Thank you, Craig and Belinda!